What Is Habit Stacking and How to Build Habits Through it Building better habits into your current lifestyle can be difficult. After all, we only form habits by repeating a behavior many, many times, often unconsciously, until the habit becomes a part of our lives. However, there’s no need to remain a victim to your bad habits or wonder what might happen if you were able to make a good habit stick.

You can transcend your bad habits, pick up good habits, or both — all through habit-stacking.

Here’s a crash course on how habit stacking works, why it works, and how to start using this proven method to change your bad habits while starting good ones.

What Is Habit Stacking?

With habit stacking, you simply take advantage of the way your mind already forms habits all on its own to create better and more positive habits.

How Does Habit Stacking Work?

But how do you actually go about habit stacking? It sounds simple but requires a few steps to get started.

First, you have to understand how habits are formed and what shape they take in your daily life.

Most habits are built upon three elements…

A trigger literally triggers your subconscious mind to perform an action it feels will benefit you. That resulting behavior from the trigger is your habit. However, your subconscious isn’t going to pick just any action; it’s going to build habits that come with a reward. That reward is your subconscious’ proof that the habit is good for you (even when, yes, it’s a bad habit). 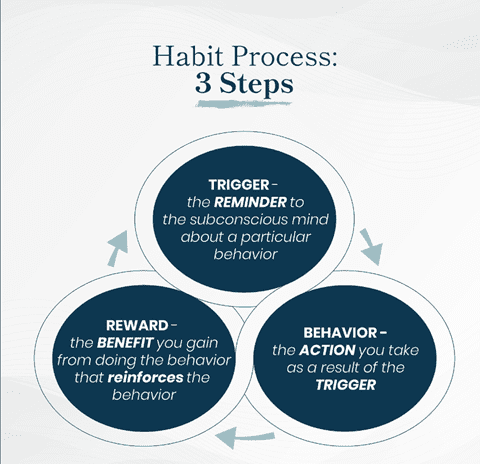 Let’s break it down into a more recognizable format…

You feel stressed out (which is your trigger), so you smoke (which is the behavior), and then your body gets some nicotine, which provides you with some relief from the stress you are experiencing (the reward). While smoking is bad for you overall, your brain gets the idea that it’s actually a good habit to have, because it relieves stress in the moment.

Good habits are built the same way — it’s just that the trigger reminds you to engage in behavior that comes with positive rather than negative consequences.

Let’s say you have a bad day at work (trigger), so you turn on the radio and listen to some of your favorite songs (behavior), which puts you in a better mood (reward). Over time, your subconscious learns that listening to music on the way home from work results in positive feelings, so it becomes a habit.

Once you understand how you form habits, you can identify your own personal triggers related to either your good or bad habits. However, to actually habit stack, you’ll need to use one of your existing habits as a trigger for the new habit you want to create.

A Habit Stacking Example to Help You Build Habits

Congratulations — you have just successfully habit-stacked!

You can get even more out of your habit stacking by stacking your habits onto what’s described as a keystone habit (or by building a keystone habit if you don’t have one already). Your keystone habits are habits that offer quick rewards, but also promote even more rewarding habits, in a chain reaction. Again, these habits can be either good or bad.

For example, if you have a good keystone habit of stretching every morning before you shower, you get the quick reward of feeling more awake and ready to start your day, which might mean you make a habit of limiting caffeine throughout the day because you feel more awake. In turn, this habit results in sleeping better at night because you haven’t had caffeine during the afternoon, which means you get up earlier than everyone else in your house, which means you have more quality alone time to get even more done; it’s a never-ending cycle of positives!

On the flip side, if you have a bad keystone habit of drinking when you get stressed, you may find yourself wanting to smoke when your drink and wanting to argue with your spouse about the smoking, and then using the stress of the argument as a reason to have another drink…well, you can see how that would be a slippery slope of a bad keystone habit.

This is why using a habit tracker can be helpful. It gives you an overall view of how all your habits stack together and helps you identify if you need to make any changes to stay on course.

Building habits — especially good ones — takes time, but habit stacking can make it easier. And if you build a keystone habit into your routine, you’ll find that the benefits are far more meaningful than just adding an extra action or chore to your day.