Blog > Diving into the Sea Moss Trend: Are There Health Benefits?

Diving into the Sea Moss Trend: Are There Health Benefits?

read
Considering adding this spiny sea veggie to your diet? A dietitian weighs in. 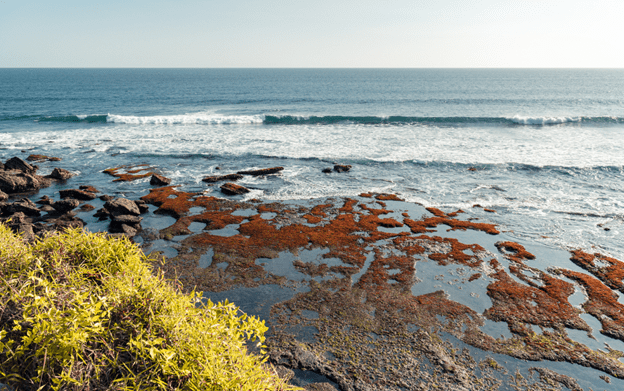 If you’re into health and wellness trends, you’ve probably seen sea moss gracing your Instagram feed or the shelves of your local nutrition store.

Sea moss began to grow in popularity among health and wellness enthusiasts during the early days of the pandemic when the world was searching for ways to boost their immunity. The trend has only continued to gather steam, with many people reaching for the spiny sea vegetable to tap into its health benefits.

Curious about trying this salt-water wellness trend? Let’s dive into the potential benefits of adding it to your diet.

What Is Sea Moss (and What Does It Taste Like)?

Sea moss is a type of seaweed or algae most commonly found on the rocky coasts of the Atlantic, between North America and Europe. It grows in a rainbow of colors, including green, yellow, purple, red, brown, and black.

Wellness enthusiasts first introduced the sea veggie as a vegan substitute for gelatin in certain puddings or jellies, but many people now take sea moss as a supplement in different smoothies, much as they would with other superfood supplements.

But be warned: If you’re not a fan of fish, you might not like the taste of sea moss. It not only tastes like seafood, but it also has a slimy texture. In fact, the most popular form of sea moss comes in a gel-like consistency, similar to applesauce or jelly.

So, if you’re comfortable eating a fishy-tasting jam, you may benefit from using sea moss as a supplement.

What Are the Health Benefits of Sea Moss?

Whether or not you’re a seafood enthusiast, sea moss can benefit your diet in many ways. Sea moss is:

Meanwhile, nutrition scientists have continued to investigate other benefits of the seaweed superfood. While the Food and Drug Administration hasn’t yet approved it as a supplement, this early research seems promising.

For example, in some preliminary studies, researchers have demonstrated that the properties found in sea moss could help treat and prevent Parkinson’s Disease by slowing its symptoms.

Although sea moss may be trending, certified nutrition specialist, licensed dietitian/nutritionist, and Arootah consultant Alesia New cautions us that we still need to conduct a lot of human research to classify sea moss as a “superfood.” Most published studies regarding the benefits of sea moss are based on seaweed or algae and aren’t sea moss specific, New notes.

Simple Ways to Incorporate Sea Moss into Your Diet

While you may not want to scuba dive to source your own sea moss, there are plenty of ways to incorporate it into your diet, via:

You can add different types of sea moss supplements to your water, beverages, and food dishes, in addition to simply taking these supplements by themselves.

Gels are one of the most popular forms of sea moss. You can add them to smoothies or drinks and many companies supplement them with other flavors to offset the fishy taste.

Additionally, some people use sea moss topically in the form of creams or lotions for an added benefit to their skin.

We’ve talked about the benefits of sea moss. But before you dive in headfirst, consider the possible side effects of taking the sea veggie.

As with any new supplement or change to your diet or wellness routine, be sure to talk to your healthcare practitioner before trying anything new.

Although sea moss research might be in its infancy, early research shows it could be a valuable supplement to your diet. The key is to follow dosing instructions and listen to your body.

Have you tried sea moss? What’s your favorite form of taking this supplement? Tell us in the comments!