Blog > What You Can Learn from Tom Brady and Discipline

What You Can Learn from Tom Brady and Discipline

read
Tom Brady did 4 things to become the GOAT. Find out what he did here. 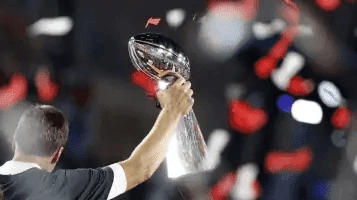 Tom Brady is a master at discipline. He is an excellent case study in using grit, determination, and hard work to get ahead in the sport he loves.

While he might be known as the GOAT (Greatest of All Time) now, he wasn’t always the best athlete but applied hard-work and dedication to dominate football.

“As an athlete, I was a late bloomer, I was a solid all-around athlete, but not an extraordinary one. Few watching me play high school football or baseball or basketball would ever have predicted I would someday end up in the pros.” Brady, Tom. The TB12 Method: How to Achieve a Lifetime of Sustained Peak Performance. First Edition, New York, NY, Simon & Schuster, 2017.

So how did he become extraordinary?

Since he came from an average football program in high school, he got creative and marketed himself enough to get recruited by the University of Michigan’s football program. Subsequently, making the 2000 NFL draft as the 199th pick. Brady knew his talent alone wouldn’t fulfill his ambitions. He had to utilize other resources to become the best quarterback the National Football League had ever seen.

Anyone who has ever seen Brady’s physical transformation knows that he went from a buff 23-year-old to a slender, 43-year-old with glowing features. A big part of that appearance is due to his disciplined eating and drinking habits. His regimen, which includes plant-based meals with no processed sugar, helps increase vitality, energy, and focus. He notoriously limits dairy, salt, caffeine, alcohol, and nightshades. Tom encourages local and organic produce for optimal nutritional intake.

Also, Brady is passionate about hydration. He claims to be drinking water all day. His water quantity tip is simple: “Drink at least one-half of your body weight in ounces of water every day.” Yet he far exceeds this and claims to drink more than 150 ounces (or 12-24 water bottles) a day, fortified with electrolytes.

This allows him to remain hydrated, determined and invigorated throughout the season.

If you think that all professional athletes need to have bulging biceps and defined six-packs, think again. Brady is the poster child for the Greek aphorism “know thyself.” Never being the strongest, fastest, quickest, or most effectively conditioned, he had to know his body and what areas would provide him with the most significant potential throughout his career. He trains himself not with heavy lifting but with drills, pliability, and resistance bands. Brady’s typical workout session consists of functional strength & conditioning response. Causing less inflammation than lifting weights and less chance of overloading the muscles.

The mindset of a champion

Brady is the winningest quarterback in NFL history with seven rings to boot. What makes this statistic even more astounding is a 10-year gap—10 grueling years of 17 game seasons, a few playoff victories, and then a painful defeat between the third and fourth Superbowl victory. Disciplining himself with a champion mindset was critical to Brady’s ability to keep getting back up after being beat numerous times. Brady exemplified this mindset this past week as his new team, the Tampa Bay Buccaneers, prepared to go up against the Kansas City Chiefs, a team that had only experienced one loss in the past 26 games. The game was on 2/7/21, and every night of the week at 11 pm from 2/1-2/6, Brady would send this text message to his teammates, “We will win.” He instilled a winner’s mindset into himself and those who were equally responsible for the team’s success.

How do you think he made that possible? Not by himself! Bill Belichick, Brady’s coach for two decades, would say this to his quarterback often, “On a football team, it’s not the strength of the individual players, but it is the strength of the unit and how they all function.” This instilled into Brady the importance of helping everyone around him be the best versions of themselves.

Many people joked that Superbowl 55 was “the Brady and Gronk show” due to Brady’s exemplary teamwork with Rob Gronkowski. According to the NFL, Brady and Gronkowski set the record for the most (14) playoff passing TDs by a QB-receiver combo, scoring 2 TDs in the first half, breaking the record of Brady’s hero, Joe Montana with Jerry Rice.

Just as keystone habits are the foundational habits that affect all other areas of our lives, exercising discipline towards one area of our lives creates a domino effect in many different areas. Saying “no” to celebratory parties and other temptations have kept Brady ahead of the game. He prioritizes his nutrition, hydration, fitness routine, and rest above all else. His commitment to a winning mindset makes him an outstanding leader who elevates his teammates. Tom Brady exemplifies this in many ways, establishing his GOAT status. We congratulate him on his fantastic season and wish him all the best moving forward.

What tips from Brady are you going to incorporate into your daily routine? Increased hydration, mindful fitness, plant-based nutrition, the mindset of a champion, teamwork, or something else? Let us know in the comments below!

You blog about Tom Brady, truly, the G.O.A.T. has inspired and motivated me to do better. I’m 67 years old and want to improve everyday to be the best that I can be. You just told me how to do it!

TB is a great case study. I totally believe sports are more about discipline, mindest, and motivation than natural ability. Maybe 50 years ago athletes could get away with that but now it is all about effort. It is too competitive.

Tom Brady is a perfect example of this! A lot of lessons can be learned from him and all of the success he and his teams have achieved!

TB leads from the front always and forever #GOAT

Mindset of a champion for the win!